Most famous among the names of the old sea captains of Bristol is that of Simeon Potter. For almost half a century Potter was the most conspicuous figure in the town in which he was born. He was also one of the influential men in the Colony and State of Rhode Island for a large part of that time.

Simeon Potter was born in Bristol in the year 1720. His father was not a man of fortune and the boy's education was almost entirely neglected. His letters, even in advanced age, are those of an illiterate man who, apparently, had never attempted to remedy the deficiencies of his youth. Perhaps this is not to be wondered at. He went forth from Bristol a humble sailor lad whose only possessions were a sound body and an imperious will. After a comparatively few years spent upon the ocean he returned to his native town with a purse overflowing with riches, a man to be looked up to for the rest of his life.
His wealth was acquired in "privateering," and tales of his captures upon the sea, and especially of his wild marauding descents upon foreign coasts, were familiar as household words to the ears of the Bristolians of three-quarters of a century ago. Those tales lost nothing in the telling and in them Potter came to be endowed with attributes he never possessed. This was especially the case with his stature. Like Charlemagne he continued to grow taller with each fifty years after his death. He came in time to be pictured as a giant in size and strength, a man whose success was largely due to the might of his arm, and not to any especial mental ability.
It was not until the letters of Father Fauque (which follow the chapter on Simeon Potter in this book) had been brought to light that we were able to see him as he really was, a slight man. Possibly his great wealth rather than an overpowering personality may have been the cause of his large influence. His fortune was estimated at a quarter of a million dollars, which was an enormous sum for those days.
He plunged gladly into the conflicts of the turbulent age, and by a happy chance came forth from them all without serious injury. When wars ceased his restless energy forced him into constant litigations; he seemed never to be happy unless he had some legal contest on his hands. His intense pride had much to do with this. Like many self-made men he could brook no opposition; he exacted from his townsmen the deference invariably rendered by seamen to the quarter-deck, and never forgot that his success was due to his own unaided efforts. Very soon after the Prince Charles had returned from the raid upon Oyapoc, French Guyana in 1744, it was visited by some officers from a British man-of-war then lying in the harbor of Newport. They were greatly pleased with the trim, man-o'-war appearance of the privateer and expressed their approbation of its commander. Unfortunately they did so with a patronizing condescension that was exceedingly galling to the young captain. When at last one of them ventured to ask "why he did not apply to his Majesty for a commission as the King would undoubtedly give him a larger and better ship" he could no longer contain himself. "When I wish for a better ship I will not ask His Majesty for one, I will build one myself," he said, and, turning on his heel, left the Englishman wondering what he could have said that seemed so offensive.
Potter left the sea and came back to Bristol to live just after the town had been transferred from Massachusetts to Rhode Island. He was first chosen to represent the town in the General Assembly in 1752, and from that time until the Revolution, when he had become an Assistant, an office corresponding to that of a State Senator today, his voice was continually heard in the colonial councils. After the war had really begun his zeal (though not his pugnacity) seems to have waned and he ceased to take an active part in the affairs of either town or State. Possibly the larger ability, the increasing influence and the more striking personality of his townsman, Governor William Bradford, may have had something to do with Potters retirement from participation in public life.
However that may be, when the contest that was to result in the independence of the United Colonies began he plunged into it with immense delight. These lines in his own handwriting, preserved to the present day by a descendant of one of his sisters (he left no children), show clearly his mental attitude at that time:
I love with all my heart
The independent part.
To obey the Parliament
My conscience won't consent.
I never can abide
To fight on England's side.
I pray that God may bless
The great and Grand Congress.
This is my mind and heart
Though none should take my part
The man that's called a Tory
To plague is all my glory.
How righteous is the cause
To keep the Congress laws!
To fight against the King
Bright Liberty will bring.
Lord North and England's King
I hope that they will swing.
Of this opinion I
Resolve to live and die 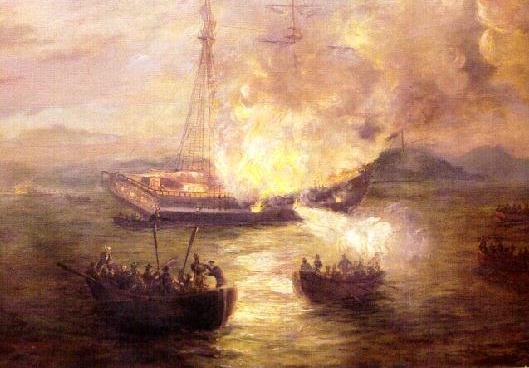 Burning of the Gaspee, Charles DeWolfe Brownell 1892
His participation in the destruction of the Gaspee has been already described. When the office of Major-General of the Rhode Island Colonial Forces was created his zeal and energy had so impressed his fellow members of the General Assembly that he was chosen to fill it. His tenure of office must have been brief. In 1776 he had been chosen Assistant (Assistants were elected by the vote of all the freemen of the Colony), but he did not present himself at many meetings of the Assembly. In fact so neglectful was he of his duties that a vote was passed requesting his reasons for absenting himself, and demanding his attendance at the next session. Undoubtedly the increased taxes had something to do with it. He was the wealthiest citizen of Bristol and one of the richest men in the Colony, and the possession of money was his chief delight. He could not bear to see it taken away from him even though the independence of the Colonies might thereby be assured. One day a young nephew was talking with him and lamenting his apparent lack of success. "How, Captain Potter," said he, "shall I go to work to make money?" "Make money," said Potter, "make money! I would plow the ocean into pea porridge to make money!"
In 1777 his name appears for the last time in the Colonial Records. At the Town Meeting held in Bristol in May of that year "Colonel Potter was chosen Moderator, but after the usual officers were elected he withdrew and refused to serve any longer."
A tax collector's account was then presented showing that he had neglected to pay all his taxes. Three years later, May 10, 1780, it was voted in Town Meeting:
That the Assessors make enquiry and make report to the town at the adjournment of the meeting, what part of Colonel Potter's taxes remain unpaid, and that Mr. Smith, the collector, be desired to apply to the Assessors of the town of Swansea to know at what time said Potter began to pay taxes in said town, and what part of his personal estate has been rated from time to time in said town.
Although he still retained his household in Bristol he had taken up his residence in Swansea, where the rate of taxation was considerably less than that of Bristol. In that Massachusetts town he continued, nominally, to reside for the rest of his life. Notwithstanding his residence in another State he still continued a member of Saint Michael's Church. In 1792 a vote of the Vestry was passed, thanking him for painting the church edifice, and for other benefactions, and in 1799 he presented a bell (with a French inscription) to the parish. His name headed the list of vestrymen from 1793 until his death. He died, at the age of eighty-six, February 20, 1806, leaving no children. His estate was by will divided among his nine sisters and their descendants. All the beneficiaries did not fare alike. He had his favorites and his strong prejudices. As is almost always the case popular estimate had exaggerated the value of his property. Instead of a quarter of a million, less than half that amount was divided among his heirs. The inventory showed that he had made a great many "wildcat" investments.

Potter's Boat Load. In 1770, Potter also had a large dwelling house, a distillery, a store, and a wharf in Providence (on the west side of Main Street and north of Power's Lane) [Chace Papers, box 1, f 18]. Potter's Providence distillery was a few houses south of the Sabin Tavern. Potter may or may not have been in Providence when John Brown laid his plans to attack the Gaspee. At any rate; Potter left from Bristol -- not from Providence -- on the night in question with a boatload of men from Bristol, with the expressed purpose of meeting the boats from Providence to join together in the attack.

We are committed to ADA compliance. Read our accessibility statement